Alhambra Theatre & Dining is the place to experience authentic live theatre on the First Coast.

Alhambra is the winner of four straight Best of Jacksonville Awards and has twice been named one of Bold City's Best. The Alhambra is fast becoming a culinary destination as well. Alhambra's Executive Chef, DeJuan Roy, delights guests by creating a brand new dinner and dessert menu for each show. Chef DeJuan Roy comes straight from highly-acclaimed 95 Cordova and was the winner of Food Network's recent Guy Fierri's Grocery Games Father's Day episode. Chef DeJuan's hand-crafted dishes are served by an incredible staff of servers. Alhambra's full bar and a unique wine list rounds out an enjoyable dining experience.

As the nation’s longest continuously running professional dinner theater, Alhambra Theatre & Dining has been a Jacksonville icon for nearly 50 years. For long-time Jacksonville residents, this is the new Alhambra, like you've never seen, heard or tasted before. The Alhambra underwent a significant restoration in 2009, as well as an equally impressive change in the overall experience. Alhambra now boasts a state-of-the-art digital sound and light system to showcase its Broadway-quality shows.

Also new to Alhambra is its Alhambra After Dark programming. In the past, Alhambra has featured eight theatrical productions – typically musicals and musical comedies with a few dramas and comedies thrown in now and then. But in 2011, the theatre launched its After Dark series to include original concerts, tribute concerts, comedy nights and other entertainment. 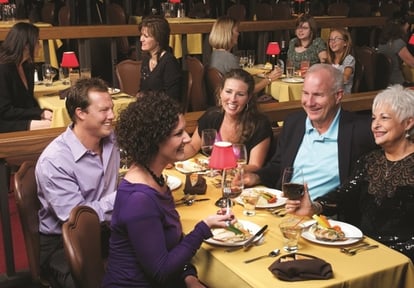 Whether you're new to town or just new to Nocatee, the Alhambra is the place for date night, family night, girls night out or just a night on the town. And with a great meal, a Broadway show and parking starting at $35, it's the best value in town, too!

To learn more about the Nocatee lifestyle and special resident perks, stop by the Nocatee Welcome Center or call 1-800-NOCATEE.