Going to the Dogs: Communities Cater to Canine Pals

Americans love their pets -- and we have more of them now than ever!

According to the Humane Society of the United States, between 1970 and 2010, the number of dogs and cats in homes skyrocketed by more than 145 percent to 164 million -- and 83.3 million of those pets were dogs. So many families now include furry friends, in fact, that 47 percent of all U.S. households have at least one dog.

It’s no surprise, therefore, that dog parks are now the fastest-growing segment of all city parks. An article in USA Today noted that between 2005 and 2010, the number of overall parks in the United States grew by just 3 percent -- but the number of dog parks grew by 34 percent, with the nation’s 100 largest cities boasting nearly 570 dog parks.

What is a Dog Park?

In its simplest terms, a dog park is a public park where dogs and their owners can engage in off-leash play. While some general public parks have evolved over time into dog parks as more pet owners frequented the area, increasingly communities are establishing formal dog parks as a way to promote responsible pet ownership while at the same time providing dogs with exercise and allowing their owners to socialize. Dog parks have become so popular that the American Kennel Club now offers a dog park guide with tips for establishing a community dog park.

In response to this trend, some master-planned communities have incorporated dog parks into their initial planning, ensuring that the community’s dog owners will have a safe location where their pets can enjoy off-leash exercise.

Nocatee, for example, is home to three designated dog parks. “Trails for Tails,” located in the Nocatee Community Park, is conveniently located in the heart of the community and is surrounded by walking paths that residents can enjoy while their dogs are playing. The “Happy Tails” dog park in Greenleaf Village, meanwhile, offers a fenced-in area, walkways and a nearby playground for the kids. And “Paws” dog park in Nocatee’s spacious Davis Park features two fenced-in dog parks and a dog wash close to sports fields and playgrounds.

Richard Ray, managing partner of Nocatee developer The PARC Group, noted, “Nocatee’s three dog parks are designed so that the whole family can relax and have fun along with their four-legged friends.” 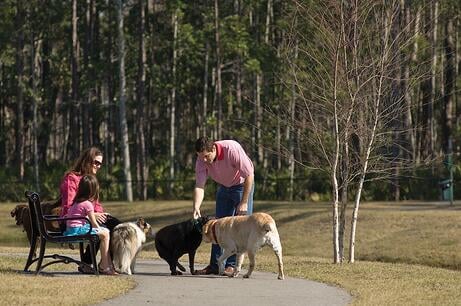 For more information on Nocatee’s dog parks and other recreational amenities, visit the Nocatee Welcome Center or call 1-800-NOCATEE.