The “Year in Review” was first published on the new Nocatee Resident Forum, designed exclusively for Nocatee residents. Residents, visit www.mynocatee.com to join!

THE YEAR IN REVIEW
(and a look forward)

2013 was an exciting year for Nocatee. We have received national acclaim and in July, Nocatee was named the sixth best-selling community in America.

The past year has very active for us as the developer.  We added 4 new neighborhoods in Nocatee - Lakeside at Town Center, Greenleaf Preserve, Enclave at Town Center and Brookwood. We also saw the last home sell in Austin Park, our first Nocatee neighborhood that opened in 2007. Construction started on a new K-8 school in the Greenleaf area, First Baptist Church announced plans for a Nocatee campus, St. Johns County announced construction plans for Nocatee’s first fire station, Advanced Disposal chose Nocatee as their corporate headquarters, and we completed the plans for expansion of the Splash Water Park.  Our community event staff also added a calendar-full of events and activities for our residents and their guests.

Our Town Center is continuing to take shape as Publix and our other retailers are enjoying strong business.  Dick’s Wings and Yobe are in full swing and First Coast Energy announced the opening of a Shell Gas Station and Daily’s convenience store.

Many changes will be taking place in Splash Water Park through the winter and spring of 2014 as we add to our recreation amenities.  The west end of the Water Park will be expanded to include an additional family pool, kids spray ground and an abundance of covered deck space.  Across the parking lot in the former Farmers Market field, we will begin construction of a heated Junior Olympic swimming pool, community garden, and basketball court.  And our kayak launch is set to open later this month at the base of the Nocatee Parkway on the west side of the Intracoastal Waterway.

While we have done our best to construct roads, amenities and neighborhoods, it is the “community” that makes Nocatee a desirable place to live. With multiple events and activities happening every week for families, grown-ups, and kids, there’s no question that the Nocatee lifestyle is unlike any other. We thank residents for their part in making Nocatee the community of choice in Northeast Florida.

To learn more about the Nocatee community, stop by the Nocatee Welcome Center or call 1-800-NOCATEE. 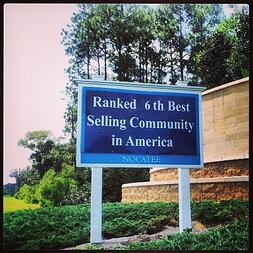