Exploring the Past in Historic St. Augustine

As America’s oldest continuously occupied city established by Europeans, St. Augustine, Florida is rich with history. Located approximately 40 miles from Jacksonville and less than 30 minutes from Ponte Vedra, the “Oldest City” is a popular local destination for Northeast Florida and Nocatee residents eager to explore the culture and traditions of its native inhabitants, as well as the Spanish and English settlers who called the city home.

In 2013, the state of Florida marked the 500th anniversary of the arrival of Spanish explorer Juan Ponce de Leon. And in 2015, the city of St. Augustine will celebrate its 450th anniversary with a series of events honoring the 1565 settlement of the city by Pedro Menendez de Aviles. That’s right: 42 years before the founding of Jamestown and 55 years before the pilgrims set foot on Plymouth Rock, European settlers were establishing the city that is now St. Augustine.

Here are just a few of the many historic sites that await visitors to St. Augustine:

Ponce de Leon has long been associated with the fabled search for the Fountain of Youth -- and some believe the natural mineral spring located in St. Augustine was the basis for the legends. Visitors to the 15-acre park can only sip water from the spring while learning about Ponce de Leon’s adventures. The site is also home to a Navigator’s Planetarium that spotlights the navigational techniques early explorers used to guide them to the New World.

Located on St. George St. in the heart of St. Augustine’s historic district is the oldest wooden schoolhouse in the United States. Believed to be more than 300 years old, the small wooden structure became a schoolhouse in 1788. Visitors to the one-room schoolhouse are greeted by an animatronic schoolmaster and his pupils, who describe a typical day was like in the classroom. 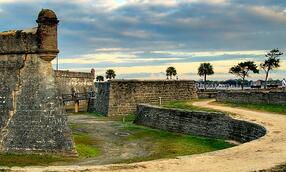 Located across the street from Flagler College, the Lightner Museum began life in 1887 as the Hotel Alcazar, which at that time boasted the largest indoor swimming pool in the world. Today, visitors may view Otto Lightner’s collection of Gilded Age Victoriana and dine in the Cafe Alcazar, located in what was originally the deep end of the hotel swimming pool!

Located in Ponte Vedra, Florida, Nocatee residents enjoy living less than 15 miles from the historic charm of Saint Augustine. To learn more about Nocatee’s prime location and new homes for sale, stop by the Nocatee Welcome Center or call 1-800-NOCATEE.