Nocatee has won the Southeast Building Conference’s (SEBC) Excel Award for Best Master-Planned Community of the Year. Given July 17, the Excel Awards honor professionals making major contributions to the residential homebuilding and commercial construction industries through superior, innovative and creative sales and marketing.

The latest award comes on the heels of real estate advisory firm RCLCO’s Top-Selling Master-Planned Communities Mid-Year 2015 Update released July 7, which shows Nocatee recorded the strongest increase in sales for Florida master-planned communities (MPCs), with mid-year 2015 activity increasing by 19 percent over 2014 levels. According to the report, sales activity “would have been even stronger if inventory had been able to keep up with robust demand.”

With 601 new home sales in the first two quarters of 2015, Nocatee continues its rapid growth, with numerous industry bodies taking note. In March, the Northeast Florida Builders Association’s Sales and Marketing Council named the community’s master developer, The PARC Group, its Developer of the Year for the ninth consecutive year.

Nocatee began 2014 ranked as the nation’s fifth top-selling master-planned community and now comes in at third, behind only the Villages in Ocala and Irvine Ranch in southern California. Nocatee has made a rapid climb in recent years, sitting at the 10th spot just two and a half years ago.

About the Excel Awards and the Southeast Building Conference 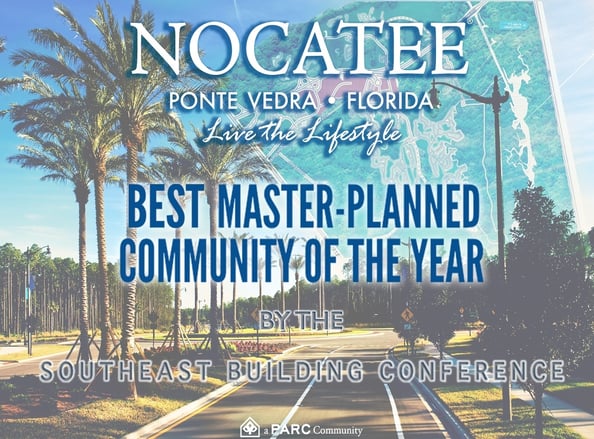 To learn about affordable new homes available in Nocatee, explore nocatee.com, call 1-800-NOCATEE or stop by the Nocatee Welcome Center.