12 Things You May Not Know About the First Coast

Whether you’ve lived here for decades or are simply contemplating a visit, the First Coast is a very interesting place to be, and always has been.

You already know the St. Johns is one of only two rivers in the U.S. that flow south to north. And that Jacksonville is the largest city in the nation in land mass. Here are some additional facts about the Jacksonville area that may surprise you (and provide fun trivia for your next dinner party): 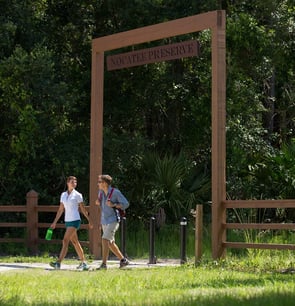 Jacksonville has one of the largest park systems in the nation, with more than 400 parks and recreational sites. Nature friendly First Coast communities, like Nocatee, even offer their own neighborhood parks and trail systems. No shortage of outdoor and water recreation here!

It only makes sense that the largest city in the continental U.S. would have the largest 15K in the country. Gate River Run is a beast of a course, with more than 20,000 participants traveling from all over the world to run across the Hart Bridge (aka The Green Monster).

3 ) One of the best zoos in the country:

Of course, we’re a bit partial, but now it’s official. The Jacksonville Zoo was recently ranked among the best 25 in the country by TripAdvisor. A membership to the family-friendly zoo perfectly compliments the active Nocatee lifestyle. 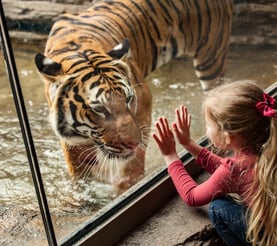 4 ) More culture than you can shake a stick at:

According to PropertyShark.com, Jacksonville ranks 11th among the 20 Best U.S. Cities for Culture. With one cultural attraction for every 2,483 people—from the Cummer Museum to Fort Clinch—our residents and visitors won’t ever feel bored.

One of Elvis’ first indoor concerts was held at the historic Florida Theatre in 1956. A judge was even watching the show to make sure his dancing didn’t become too suggestive that it would send teenagers into a frenzy (as it had the year before). 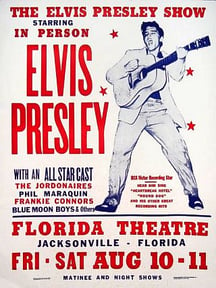 6 ) Before Hollywood, there was Jacksonville:

In the early 20th century, Jacksonville was home to more than 30 movie companies, and was even known as “The Winter Film Capital of the World.” Locals made such complaints about the noise they ran the movie industry clear across the country to California.

7 ) Where the Blues and many musical legends began:

From Lynyrd Skynyrd and The Allman Brothers Band to Limp Bizkit, there’s been no shortage of musical talent to emerge from the River City. It’s even rumored as the very first place where “The Blues” were actually referred to as The Blues in LaVilla in 1910.

Jacksonville wasn’t always called Jacksonville. When it was a settlement in the early 18th century, it was known as Cow Ford, because of all the herding that was going on along the St. Johns River. It was renamed after our 7th president, Andrew Jackson in 1832.

9 ) One of the best small towns in the nation:

Locals know that St. Augustine and surrounding Nocatee are great places to live. And the nation’s oldest city was recently ranked 4th among the best small towns in the nation by Livability.com.

10 ) St. Johns County School District ahead of the class:

From energy efficiency to FCAT scores, St. Johns County School District has a lot to be proud of (in addition to its students). The district has consistently received high marks for being a Grade A district and ranking first in the state for total FCAT points, and many other achievements.

11 ) Home to the healthiest county in Florida:

St. Johns County has been named the healthiest county in Florida for four consecutive years. Criteria include physical environment, clinical care and economics, as well as health behaviors. Over 85 percent of the Nocatee is located in St. Johns County.

No one can predict the future, and we definitely aren’t trying to jinx anything… Even though we are located in Hurricane Alley, Jacksonville has only had 2 direct hits in more than 50 years.

To learn more about new homes available in Nocatee, explore www.nocatee.com, call (904)-924-6863 or stop by the Nocatee Welcome Center.