Some 75 million people visit Florida each year, drawn by its beautiful weather, spectacular beaches and world-famous theme parks and attractions. But the Sunshine State is just as popular with Florida residents, and now that summer vacation is here, local families can take advantage of Florida’s attractions without spending a fortune on airplane tickets and hotel stays.

Here are four fun day trips all located within just two and a half hours or less of the Jacksonville and Ponte Vedra area: 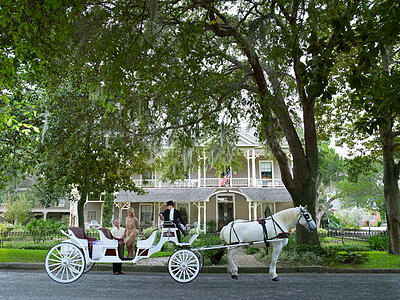 Amelia Island: Located near the Florida/Georgia border (approximately one hour north of Ponte Vedra), Amelia Island is a historic coastal community that harkens back to a simpler time. Recently named to Buzzfeed’s list of “11 Small Florida Towns You Need to Visit,” Amelia Island was a popular summertime destination for wealthy northerners as far back as the 1850s, and it’s just as popular with tourists today. Take a horse-drawn carriage ride past the picturesque Victorian homes of Fernandina Beach. Stroll among the shops and galleries of Centre Street. Go horseback riding along the seashore. Spend a day with the kids at the beach. Or simply indulge yourself at one of the island’s top-notch spas and resorts that are equally famous for their world-class golf courses and restaurants.

One of the world’s most famous beaches, Daytona Beach is just one hour and 20 minutes south of Ponte Vedra. Enjoy a day of seaside fun at the beach, where swimming, parasailing, fishing and scuba diving are just a few of the available activities. Ride the Ferris wheel and other amusement park offerings at the Boardwalk and Pier. And don’t forget to visit the Daytona International Speedway, where racing enthusiasts can test their own driving abilities at the Exotic Driving Experience.

Sooner or later, all Florida road trips lead to Orlando. Located just two hours southwest of Ponte Vedra, the “theme park capital of the world” is home to such legendary entertainment destinations as:

Before departing on your Florida day trip, be sure to check online for discounts, as many of the state’s most popular destinations offer price breaks especially for Florida residents. Nocatee residents are eligible for discounts to various theme parks and attractions in the area.